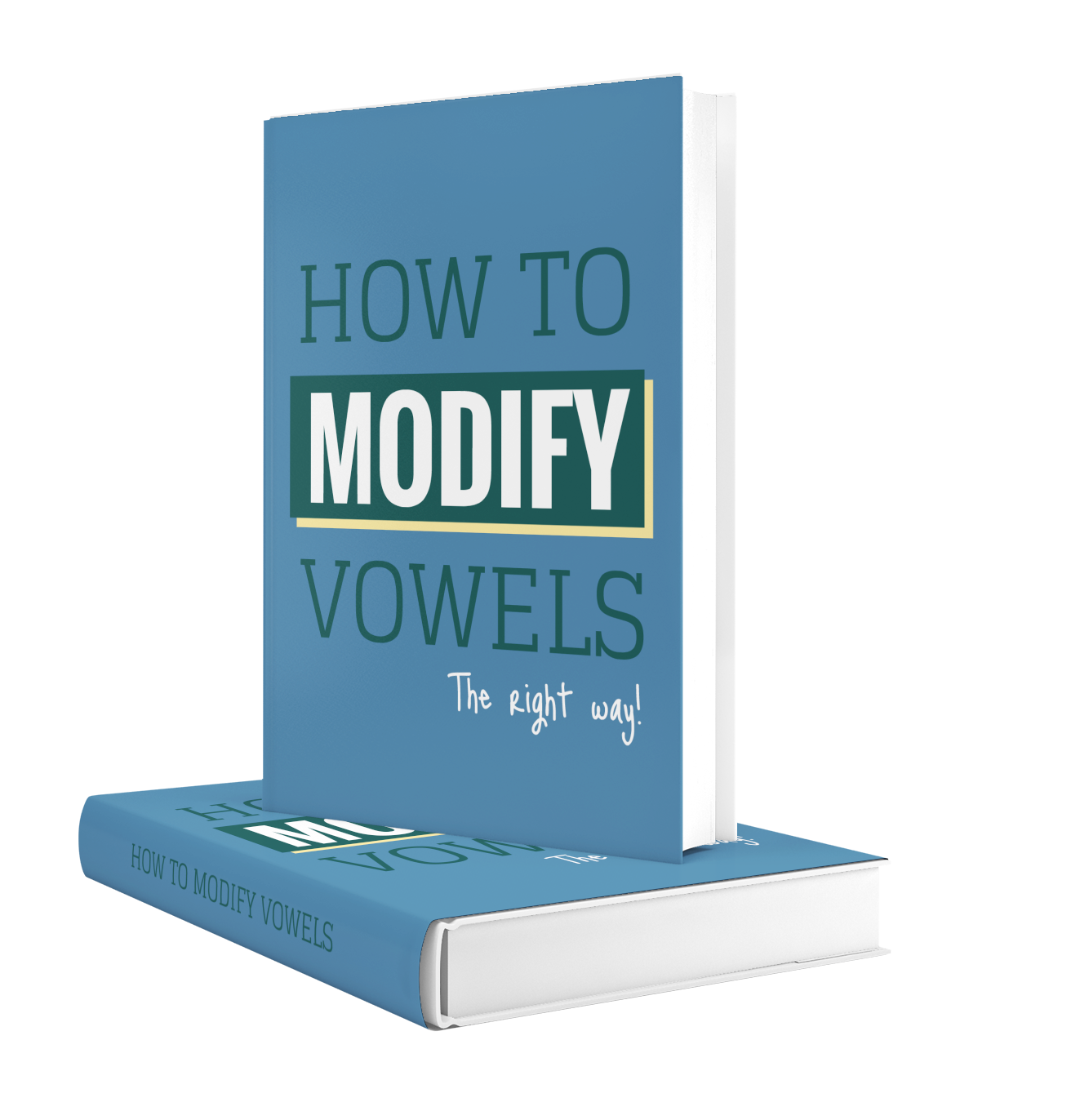 Vowel Modification seemed like such a crazy mystery when I first started learning how to sing - it always seemed like I was just shouting "OH!" and making weird sounds instead of making my voice sound any better, until I learned the vowel modification singing tips that I'm about to share with you.

Now, before we talk about vowel modification, it's important that you first understand what "vowel" really means when it comes to great singing.

For example, In my speaking accent as an Aussie, my vowels are something like "AYE, EEY, EYE, OWE, YOU" for A, E, I, O, U - no doubt pronounced and spoken differently in your accent. These highly articulated and pronounced speech sounds simply aren't designed to make use of your full range, tone of sustained resonance  - they're just for quick, efficient communication in speech.

But when you actually SING, your vowels are actually formed in the resonant space in the pharynx - and this is why great singers always make use of "the international singer's accent" or more correctly "accent neutral" singing where their speaking voice and accent are bypassed in place of their natural resonance.

And this is why I had so much trouble when I first started learning how to sing - I was basically just changing the pronunciation of my speech vowels to mimic what I thought I could hear my teachers doing when they were actually altering the size and shape of their vocal tracts to allow different vowel and register overtones.

There are actually FOUR register overtones for each vowel that you sing.

So when we modify our vowels, we're not just changing the pronunciation of our speech vowels and literally singing a different vowel sound - we're just making subtle alterations to the shape of our vocal tract to bring out a different overtone within the frequencies of the vowel while also allowing a shift between the two vibratory mechanisms of the voice, the 'body' of the fold and the 'edge' of the fold, often called Chest and Head voice respectively.

A great example of this is with the most common vowel you're likely to sing, the AH vowel - which is formed by lowering the tongue to a concave in the base of the mouth, raising the soft palate to allow resonant space and keeping to a vertical embouchure of the mouth rather than a wide horizontal smile. Now, ascending from this sound - you might get to a D4 or so with a bit of a push, but it's obvious that something needs to change for you to sing higher in full voice without busting a nut in the process - you guessed it, we need to modify our vowel.

Keeping in mind that vowel modification (actually, sung vowels in general!) are formed in the pharynx and sung with sustained resonance rather than a syllablic speech delivery - we need to raise the soft palate a touch more and allow a little width in our tract while also allowing a shift away from full weight in the body of the folds towards a more balanced mix coordination that involves less of the body of the vocal fold and more use of the CT muscle to 'stretch' the folds.

As we alter the tract and fold coordination around this first break period in your voice, that natural sounding AH vowel that probably sounds something akin to the word "Hard" in a wide open Boston accent saying "Paaak the Caah" (park the car), the change in size and shape in your vocal tract alters the vowel overtone from "Hard" to "Hawed" - now, if you sound like you're just pronouncing like a pirate, then that's exactly what you're doing - you're pronouncing instead of modifying your vowel.

In my experience as a professional voice coach for over a decade, I've noticed that many singers take the ball and run with it with specific pieces of information, especially this first overtone shift in the voice and try to take this sound as high as possible in chest voice - all the while wondering why they sound shouty and they struggle to sing past an E4 without yelling, flipping and breaking.

Remember, there's actually FOUR vowel overtones for each vowel sound that you sing - if you're just changing your vowel from AH to AW, then you're only opening up into that first overtone rather than making full use of your frequency and tonal range as a singer. I see this all the time with singers who struggle to sing EE vowels, like the word "Free" - instead of modifying their vowel properly, they just change the vowel completely into EH so the word sounds like "Fray" without actually modifying their EE vowel properly.

Now, before I throw any more text at you, I want to SHOW you exactly how to modify your vowels properly to achieve each register overtone so that you can connect chest and head voice, sing in full voice no matter what register or range and ultimately improve your singing voice out of sight. Make sure you watch the video below to learn exactly how I modify my vowel sounds to extend my naturally low baritone range into the four octaves I now enjoy (you can watch the full video HERE to also see a "before and after" of my own voice before and after I learned what I'm about to share with you):

Having BIG DREAMS as a singer means you need a BIG VOICE to match - watch the video above to learn how you're going to build a big voice too using Vowel Modification and register overtones!