Have you been struggling against your low voice trying to hit high notes without strain and tension with little success? You’ve probably noticed that your voice is ‘different’ to other guys voices – especially all those Tenor voice coaches on YouTube that make it look so easy “it’s easy – just quack like a duck!” without any further explanation for how or why you’re trying to copy the weird sounds they’re making. If you’re struggling with even mid or low range songs and your vocal break seems to happen REALLY low, then you my friend, are likely a Baritone just like me.

Here’s 5 tips to get you started on your way to better baritone singing.

I’ll take an educated guess that your voice feels like it’s stuck in your throat, right? This is due to incorrect placement. Basically, the frequencies that you’re creating aren’t making the best use of your vocal resonators. Basically, your voice is like an Acoustic guitar with no sound hole. Placement is actually super simple to achieve for a baritone, and really centres around the figurative intention of singing “above” the top teeth and a little forward. This is because your three vocal resonators are the mouth, pharynx and nasal resonator – not your chest, and definitely not your throat.

[one_half padding=”0 20px 0 0″][/one_half]You might be thinking “but what about chest voice?”. You’re right, chest voice exists – but your chest itself is not an efficient resonator for the voice, and is really just a figurative tonal centre for your low range even though it is generally resonating within the mouth or nasal resonators. One of the main keys to better baritone singing is to place your frequencies correctly, starting with a simple placement at your top teeth. You can achieve this with a gentle but bright buzzing “N” or “NG” sound – can you feel how this sound resonates in your nose or even your teeth? Congratulations, this is the first stage to vocal placement – now you just need to take it forward.

Inconsistent airflow is the #1 issue I come across in my first session with many singers – yes, even advanced and professional singers struggle with this simple concept. Resonance is created by vibration, and vibration is created by consistent energy; or consistent airflow when it comes to singing. There’s two main voice types where airflow is concerned, and this is partially linked to your accent, voice type and vocal habits in general. The first applies more to lighter and higher singers and is known as an ‘aspirate’ voice – basically, a voice with too much airflow, resulting in inefficient or a lack of resonance. The solution here is to perform a slight ‘hold’ at the diaphragm to slow the exhalation of air – like a very slow tire leak or a drawn out “SHH” sound.

The second type applies more to guys like you and I that suffer the dreaded clamp and push. The solution here is actually to release a touch of air to maintain consistent flow instead of choking off at your vocal folds. You can achieve this release by allowing a slight “hHh” on the notes/words that are in anticipation of a push. Say you’re singing a simple major scale with “Lah-lah-lah-lah-LLAAA” and you absolutely roar and push the top note like an Eddie Vedder wannabe – instead, you need to release some air to avoid excess compression in the airway by singing something along the lines of “Lah-lah-lah-hlah-hlhaa” with a gentle release on the higher notes to avoid the push.

For me personally, developing consistent airflow by way of effective support was a game changing experience in the process of learning how to sing.

You might be surprised to learn that singing and speaking are not the same thing. Where we speak with the vowel formed predominantly in the mouth, we actually sing (well, you SHOULD sing) with the vowel formed in the pharynx and vocal tract itself. Instead of pronouncing your words, instead you should be shaping each vowel sound and altering the shape of your vocal tract through each register of the voice – first neutral, a touch wider through the first break and then narrowing incrementally up into your head register. The basic vowel shapes follow two main groups;

Now, each of these tongue shapes replaces your speech pronunciation and accent when you sing – ever wondered why spectacular singers aren’t a slave to their accent? The universal singing accent is actually “accent free” due to the similarities in vowels correctly formed by excellent singers.

[one_half padding=”0 20px 0 0″][/one_half]Vowel in singing really refers to “resonant overtone” rather than “speech sound” – but perhaps that’s a conversion for another time.

Let’s keep this as simple as possible. Remember how we just discussed the meaning of “vowel” in singing to really mean “resonant overtone”? Well, along with the pure resonant overtone of each vowel like AH, EE and AY, there’s also a shifting overtone for each register that in turn alters the character of your vowel as the vocal tract morphs in size and shape to become the most efficient resonator through each register. Clear as mud? Actually, this is pretty easy.

As you ascend on an AH based word, like the word “Love” for example, the resonant space alters to a somewhat wider configuration and the sound moves forward in the face towards a slightly French sounding “OH” similar to the American pronunciation of the word “Lost” (of “Last” to Australians and many Europeans like me), and then towards a narrow shape in the tract altering the resonant character to a subtle EAH like the word “Heard” and finally a fully narrowed french OU/OO sound, like so;

For many years I actually thought that mixed voice was just a marketing term, but as my voice has grown and I’ve learned to differentiate the tonal centre for each register, I’ve learned that there is a balance between chest and head resonance that occurs through the centre of the voice. You might find that currently you have a VERY defined break and flip between your chest voice and your head voice – which is normal for a beginner singer. However, this is not the way your vocal mechanism is really designed to work. As you learn to balance use of the TA and CT muscles (weight vs stretch in your folds), you’ll also learn to balance between chest and head resonance to create a third honorary register; mixed voice. 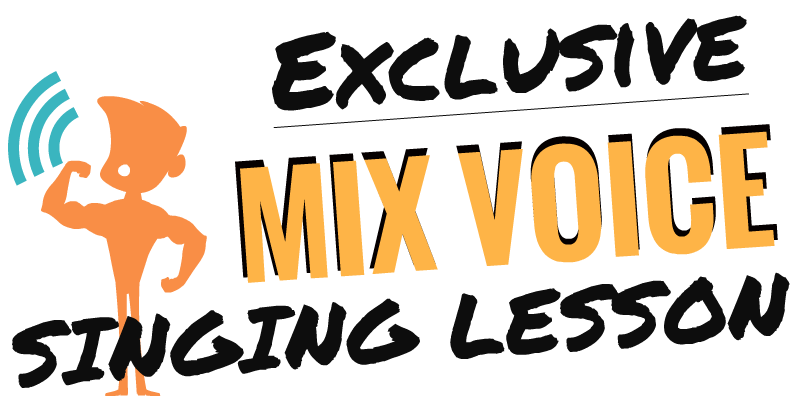 Instead of pushing your deep chest register higher and higher until your break, you simply need to create a gradient between chest and head voice that is equal parts either register as you travel through the middle of your range – this is known as mixed voice.

Mixed voice is super simple to achieve, but you’ve going to need an open mind and a slight shift in perception. Full voice doesn’t just exist in chest voice, it also exists in head voice too – and this is the key to effective mixed resonance. A great way to kick start your mixed voice is to sing with a “classroom voice” tonality – you know, the tone that you would use in a classroom full of kids. “Okay everyone, look here!” – you’re not going to yell at the little darlings because they’ll cry, but on the flip side, you’re not going to let them walk all over you while to whisper for attention. Instead, you’ll use an assertive but pleasant (I’ve actually heard it called “passive aggressive voice” too) tone that is equal parts chest and head voice – magic stuff, right? Now all you need to do is practice, practice, practice with this mixed tone and your range and tone will grow like absolute crazy as your mechanism starts to shift and move in the way it was designed; not the way that you’re currently using it just for speech.

A great place to get started improving your baritone singing voice is this exclusive Mixed Voice Singing Lesson which will show you the process I use with each of my baritone students to help them find mixed resonance and release their voices from strain and tension.

Want to hear a baritone singing in a well developed mixed voice? Here’s just a few examples of what I’m achieving now that I’ve found my mixed voice – just think of what you could be achieving when you find your mix!