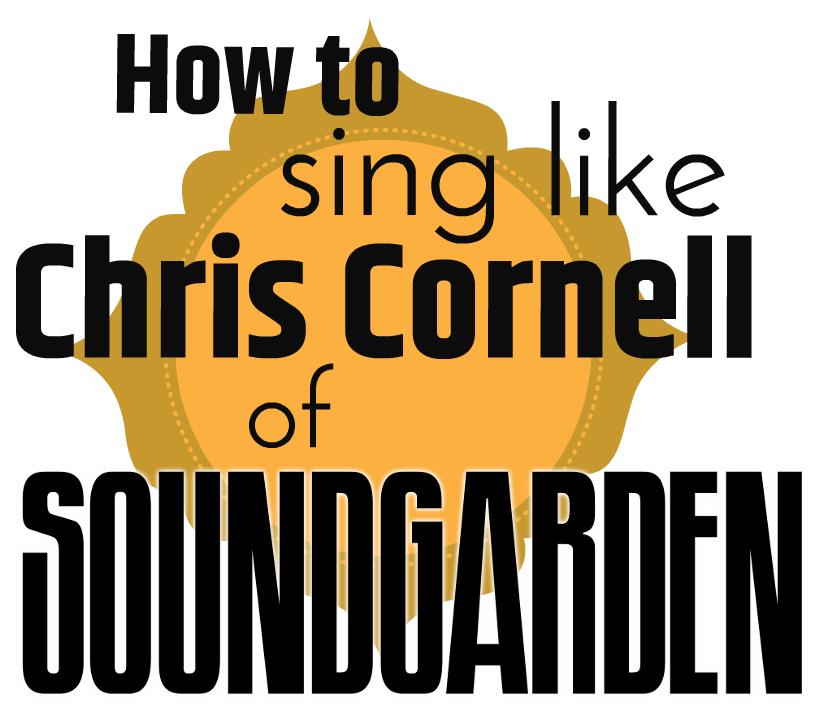 One of the important things you will ever learn in singing is the ability to bridge and connect chest and head voice – this connection is often know as mix voice. Mixed Voice occurs when you blend frequencies from your chest voice with frequencies from the head register, allowing you to retain the rich depth that we all know and love from Chest Voice, while enjoying the extensive range afforded by head voice. Chris Cornell was a MASTER of mix voice, which is the reason he was able to retain a rich and full vocal tone as he ascended far beyond the realms of normal Chest Voice.

Releasing your registers as you ascend allows you to keep a connected and ‘zipped’ vocal chord coordination that sails way up into your high range with all the power you associate with ‘chest voice’, but without any of the tension or strain you’re currently experiencing. This register release allows you to sing in the mix coordination and build a truly powerful and extensive vocal range.

Learning control of your registers will allow you to develop the proper chord coordination required to learn how to sing like Chris Cornell with POWER and EASE into your high range. These 5 tips to sing like Chris Cornell will set you in the right direction of building a powerful and consistent singing voice that allows you to sing high notes with ease and intensity.

If you want to learn how to sing like Chris Cornell, releasing from your Chest Voice into your MIX voice is absolutely paramount – there’s a reason that Chris Cornell’s voice doesn’t just flip up into falsetto when he sings high songs like Jesus Christ Pose or Cochise – a blend of frequencies between chest and head voice. It’s important to understand how your vocal chords come together to create ‘chest voice’ and ‘head voice’ first, and secondly you need to learn how to connect and bridge the two by using what is commonly called Middle or Mix Voice.

Your middle voice is partially the result of coordination between the muscles that create your chest voice, the TA (thyroarytenoid) and those that create your head voice, the CT (cricothyroid) – but in a practical sense, Mix Voice is simply a tonal blend of frequencies from both your high and low registers, in essence, a “mix” of chest resonance and head resonance together. By centrally balancing these registers so that you have a fluid and ever changing ‘gradient’ coordination  of frequencies rather than a dominant pull or push in either direction, you can retain the rich depth of chest voice while accessing the impressive range allowed by your head register.

I’m quite often asked by beginner singers “How does Chris Cornell belt so high?” when in actual fact he was often singing in a released middle coordination and simply tuning his resonance in a very precise way for the most efficient use of his frequencies. If you want to learn how to sing like Chris Cornell, you’re going to need to learn how to sing in mix voice while coordination of the CT and TA muscles – excess vocal fold weight is no friend to you if you want to sing like Chris.

While we often pronounce our vowels in speech using our articulators – the lips, teeth and tongue, singing actually requires a specific tongue shape and corresponding vocal tract width for each of your vowel sounds. As an example, AH is the widest vowel sound and requires a concave tongue, while EE is the most narrow vowel and requires you to raise the back of your tongue.

Further to the point I made earlier about Chris Cornell not being stuck in ‘belt’ mode when he sang, you’ll notice that Chris Cornell was able to articulate absolutely every sing word that he sang into his high range without resorting to the common issue that Male singers often experience – a lack of EE or OO vowels high in your range. This is due to the overly wide vocal tract setup required for belting and is a product of poor technique, where Chris Cornell actually retained his EE and OO sounds due to correct shaping and tuning of his vowels in many classic Soundgarden and Audioslave songs.

Even with these special singing vowels, you’re likely to run into trouble with voice breaks here and there – that’s why it’s SO important to tune your vowels as you ascend in range. Basically, everyone’s vowels require a different character, or different ‘width’ as you ascend in range, due to physical differences in the vocal tract, vocal mechanism and of course – level of vocal technique. Tuning your vowels does require consonant practice, patience and perseverance, but it’s a simple concept at heart and really is the cornerstone of any POWERFUL singing approach.

Learning how to tune your vowels properly will allow you to sing with a POWERFUL resonance that is connected and consistent well up into your higher range. The most common way to tune your vowel is known as vowel modification, but is ultimately just a subtle change in the width and shape of your vocal tract via use of the tongue root, larynx, soft palate and walls of the vocal tract itself. Develop control over these often misunderstood vocal elements and you will be singing high into your range while connecting Chest Voice vs Head Voice with ease just like Chris Cornell!

My approach to consonant sounds is to group them into their respective types and form an individual approach to each consonant considering my student’s range, voice type and native tongue. Keep in mind that a vocal onset is actually a different aspect of vocal technique to a consonant sound – are you trying to initiate your resonance on a consonant sound like S, T or B? The solution is to develop a balanced resonant onset while articulating your consonant sound corrrectly.

Are you making use of your Mix register, singing with a balanced resonant onset, connecting chest and head voice, tuning your resonance while employing a healthy and strong vocal foundation? Foundation truly is the most important key to learning how to sing like Chris Cornell. A great place to start is this special Mix Voice singing lesson which will show you exactly how to develop your mix voice and create that killer blend of frequencies that Chris was so well known for. Remember, the key to a powerful singing voice is a powerful foundation – is your foundation as rock solid as it could be?