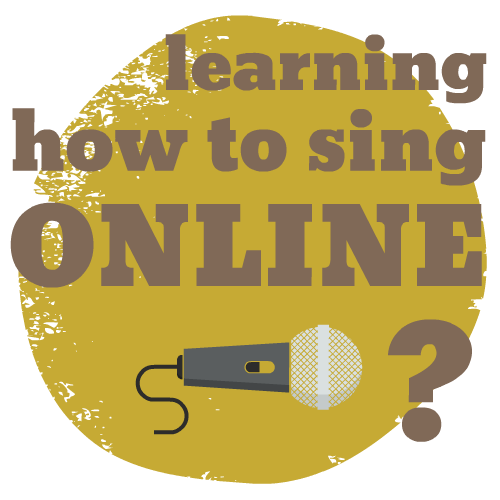 If I had to start building my singing voice again from scratch, these 4 simple steps to strengthen your singing voice would be the exact place that I would start. I wouldn't bother with edge, or compression, or cry - or many of the other complicated vocal techniques that I spent a proverbial lifetime struggling to learn as a fledgling singer; I'd start with the basics, the fundamentals - the foundation of a great singing voice.

What makes a STRONG singing voice?

Okay, let's clarify something first - while a great singer is often called a 'strong' singer, and a great voice is often called a 'strong' voice, great singing is much less to do with muscular bravado and brute force than it is to do with balance, coordination, resonance and confidence. Look at Freddie Mercury, who was all of about 5 foot eight and 65 kilograms - yet he was one of the greatest singers of all time. Look at all those skinny 1970's guys like John Fogerty, Paul Rodgers, or Glenn Hughes - all skinny little guys who absolutely wailed as singers with "strong" voices. Catch my drift? Great singing is balanced singing, strong singing is confident singing - but one thing a great singing voice isn't, is a 100 pound barbell or an army tank.

These four points alone are the ONLY reason you've been struggling to strengthen your singing voice.

It's not that you have a bad voice, or that you're a weakling, or that you need your vocal folds to lift weights for a year before you'll be a better singer, the only thing you'll ever need to build a great singing voice is;

One of the most common reason for a 'weak' sounding singing voice is a lack of airflow management. Basically, you're choking off your air or letting too much out. Basically, if you're gasping for air at the end of a phrase, or your words are coming out super choppy and disconnected, you're screwing up your airflow.

This doesn't mean you need to push from the belly, or make like a bathroom movement, or clench, or push - you simply need to manage your airflow through the line of a song. An excellent example of this is in the chorus of Soundgarden's seminal Black Hole Sun where Chris Cornell sings "...and wash away the rain" - it's not sung as "And. Wash. Away. The. Rain" - it's actually sung a little more like "EhnwAhsh-OuwEhEe-thAHrEhEen" as one phrase as he sustains the resonance and manages his airflow like a total boss.

This doesn't mean you have to slur through your words, or sing everything like it's 1995 again; but it's a clear example of a singer with great control over their support while singing all in one flow.

Managing airflow really is one of the key aspects of strengthening your singing voice - if you want to sing stronger, try to balance your airflow and air pressure in a more controlled way without letting too much air through the folds, but without pushing and clamping like you're constipated.

If you want to strengthen your singing voice, singing a phrase or exercise "all in one flow" is your new. best. friend.

#2 - Height In The Vocal Tract

Ever had a singing teacher tell you to 'yawn more' when you sing? You guessed it, they're trying to get you to raise your soft palate higher as you ascend in range.

Granted, yawning does work for beginners who really aren't that familiar with the anatomy of the singing voice - but let's face it, you're a little past the beginning stages, right? And you're ready for the true key to great singing? Just tell me the damn secret already?

The key to achieving and retaining height in the vocal tract when you sing is a little concept called The Internal Smile. This powerhouse vocal technique unfortunately gets destroyed like a motorcycle in a ten car pile-up on YouTube by coaches who tell everyone to "Smile Wide!" "Bright Smile" and the like - which actually widens the vocal tract and gives an initial 'superficial' height in your tract through the first break, but ultimately forces you to belt and push once you get into your mix voice. I see this a LOT with singers who are stuck in "Perma-Belt" mode, where they can ONLY push a note through the mid section of the voice with little finesse, and incredibly dangerous tension.

Once and for all, it's the gosh darn INTERNAL smile, not a "wide smile at the lips".

The internal smile is a result of raising your cheeks under the eyes slightly, keeping them peepers wide and bright, allowing your cheeks to sink a little at the back of the mouth and last of all - raising the soft palate as you inhale. Try it yourself just like you've made eye contact with a dashing brunette across the bar - you're not going to bare your teeth at her like The Joker, instead you're just going to flash an inviting "smile with the eyes" with a pleasant look and little change in your actual expression. Try this a few times and then sing a vocal line; no doubt you'll notice a change to many of your vowel sounds as they open into the pharynx instead of forming in the mouth.

The key here is to retain that space while narrowing or widening as needed through each break passage in your voice - the general rule is that you widen a touch through the first break on most vowels, while narrowing sequentially up through mixed voice into the head register from this point onwards. 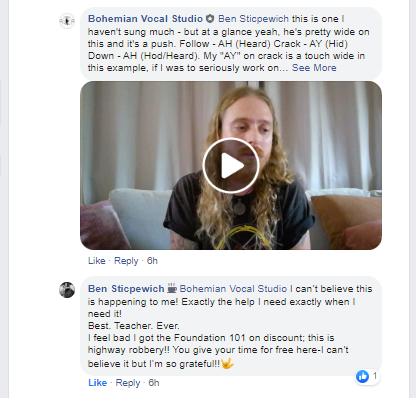 This is where we get the concept of vowel modification. With the soft palate raised in this way, the pure sound of each of our vowel sounds actually alters as we shift through each register overtone - all AH based vowels will sound a little like the word "Hard" in chest voice, a little like "Hord" in the first aspect of your mix, more narrow towards "Heard" into your higher mix and then finally a little like "Who'd" as you fully release into head resonance. And in the case of AY based vowels, we move from "Hey" in the chest register, to "Head" in the first area of your mix, "Hid" into your higher mix and then finally "Heed" as you full transition into head resonance.

This might all seem a little confusing at first, so I encourage you to join the Mixed Voice Singing group, as I often demonstrate these overtone changes to singers just like you looking for REAL help with their singing. It's a closed but welcoming group of singers who are serious about improving their voice, and totally sick of seeing YouTube vocal gurus display killer vocal chops without sharing any of the actual secrets to great singing.

Want to know the true secret to Mixed Voice Singing? Well, it's actually to deliberately sing with a mixed tonality. I know, that alone probably doesn't break down the walls of the vocal bank for you just yet, but it's an incredibly important step in strengthening your singing voice.

Being honest here, this is something that I really struggled with for an embarrassingly long time; in part due to having a lower speaking voice as a Baritone - I just assumed that my singing voice should be loud, deep and thick as hell no matter what, without realising that I was pushing, yelling and straining rather than actually singing.

The funny thing about mixed voice is that I've actually gained a decent amount of low range at the same time. Where my voice used to bottom out around an F2 with this forced "low" tone, I'm quite comfortable singing a D2 now with full resonance.

I Want To Sing in Mix!

Now, mixed tonality is really just a blend of resonance between chest and head voice in varying ways through each of your registers. I sometimes like to jumpstart Mixed Voice resonance in my students' voices by using the "classroom voice" analogy - an assertive but pleasant voice you'd use to address a bunch of kids in a classroom; you're not going to yell at the little darlings, but you can't be meek either or they'll walk all over you. It'll be something like "Okay everyone! Look over here!" in a pleasant but assertive tone a little higher than your natural speaking pitch. You'll notice with a bit of practice that this actually achieves a blend of resonance between chest and head voice, and in a mechanism sense achieves a balance of TA and CT in the vocal folds (don't worry if this doesn't make sense just yet - we'll keep it simple for now!), or basically a blend of the feeling of chest voice with a blend of the feeling of head voice as you balance both weight and tension in the folds themselves.

Just as important as height in the tract and keeping your phrasing "all in one flow", mixed tonality is one of the most important aspects of a strong singing voice.

Ever wondered how your favourite singers could sing with connection between chest and head voice? Mixed resonance. A strong voice is a MIXED singing voice

Of these four points, if I had to pick only ONE for you to work on right now this very second, it would be forward placement.

Now, many beginner singers are a little scared of practising with forward placement; mainly because they hate the sound. It's bright, it's brittle, it's brassy - the three "B's" of bad tone, right? Actually, a powerful and rich vocal tone is also very bright. You would be surprised at just how forward a deep singer like Johnny Cash or even Jim Morrison is, and definitely singers like Aretha Franklin, John Fogerty and Chris Cornell.

The true issue with tonality comes from your vowel sounds and the lack of... wait for it... Height In The Vocal Tract.

That's right, these four vocal elements actually work together to create a powerful, strong, beautiful and expressive singing voice. On their own, you might not see much benefit with a forward tone, or with a consistent flow of air, or with a pharyngeal vowel, or with mixed tonality - but together they are the quadfecta of great singing. If your tone is too brassy - you need more height in the vocal tract. If your tone is dull - you need forward placement. If your voice is strained or you're pushing - you need mixed tonality and if your voice is weak - you need consistent airflow.

If I was to build my voice again from scratch, these four points would be the very first step in building the range and tone I now enjoy after many years of hard work, training and practice. My journey to becoming a great singer might have been a long struggle to reach the point of vocal freedom I now relish, but it doesn't have to be for you if you work on these four points alone - all key elements in the Foundation Vocal Method.

Instead of telling you over and over how intrinsic these four simple vocal concepts are, let me show you - here's a few quick examples of what you can achieve once you achieve forward placement, height in the vocal tract, consistent airflow and mixed tonality - just imagine the powerhouse voice you're going to enjoy when you too nail these incredible fundamentals!

Want to find out whether you have what it really takes to become a STRONG singer? This simple vocal improvement quiz will calculate your potential for improvement as a singer - it's just a few short questions, but incredibly accurate, and most singers are absolutely shocked at the result!