So You Want To Become A Singer?
Here’s How To Get Started

I was just your average, run of the mill, dime a dozen guitarist who couldn’t find a singer.

Honestly – I had no interest in even singing backups, let alone becoming a lead singer and front man – and don’t even mentioned becoming a professional voice coach.

It’s a crazy road how I went from your average guitarist to the voice coach that other voice coaches go to:

Top voice coaches with tens of thousands of subscribers of their own are even saying that my coaching studio is “The only vocal coaching studio to trust 100%” and my vocal foundation course is ranked as one of the top vocal methods in the world against the most famous methods out there, from Christina Aguilera’s masterclass to Hollywood “coach to the stars” Roger Love.

So you might be surprised to learn that I didn’t even WANT to be a singer when I first started.

I hated the idea of being upfront.

I strained, struggled, yelled and squeaked through even the lowest and most basic songs.

I just didn’t get it.

Why would anyone want to be a singer?

But you do – and you probably already know why, but let me posit a few guesses:

When you nail that high note, it just feels like FLYING.

When someone tells you they love your voice, it’s like you’ve finally won the marathon, the grand prize.

You can express your deepest, darkest feelings when you sing – unlike any other instrument.

Music is a canvas, and your voice is the most incredible palate of colours to paint with.

But let’s be honest for a moment as I tell you exactly how I went from being a guy who was just oblivious to the whole singing thing – to being a professional singer who gets these kinds of crazy reviews and comments about my singing;

Not to mentioned the constant invites that I get to join shows like The Voice, X-Factor and the amount of messages I knock back from promotional companies, record labels and others 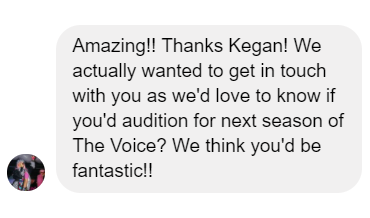 For a guy that hated singing, and hated my voice – I’m doing pretty well for myself as a professional singer, right?

Well let me tell you;

I couldn’t find a singer for my band.

It’s not some romantic story about how I was stranded with Bel Canto monks up in the Italian mountains – I just stepped up to the microphone and started singing; badly.

And over many years, many vocal lessons and even over $15,000 spent on methods courses and magic pills that were meant to help me sing better and did very little for my singing – I finally cracked it.

And by cracked, I don’t mean my voice.

Seriously, once I realised that singing should actually be EASY, and that I didn’t actually have a terrible voice – just awful technique; singing became a WHOLE lot easier, and I started seeing real, tangible, ridiculous progress in my range, tone and abilities as a singer.

And over many years of future lessons, training and methods – I finally started sharing what I had learned with others, and the rest is really history.

But what exactly was it that took my tired, hoarse, poor bastard of a voice that couldn’t string five notes together – and turned it into a POWERHOUSE that gets my approach put up along side the most famous vocal methods out there, and has other voice coaches lining up not only to learn my approach; but for me to help them with their own singing?

Watch this video to learn exactly how I turned one measly octave of range into four full octaves of power and finally started my career as a professional singer and voice coach;