I recently sat down and worked out exactly how much I've spent over the years on singing lessons, the best singing courses and other methods of learning how to sing. I was pretty shocked when an average total came in at well over $15,000 - and I'd love to share with you exactly what I learned while spending the equivalent of a small car, part of a home deposit or decent collection of top of the line Gibson guitars.

How did I work this out?

Before I share with you what I learned in nearly a decade of singing lessons, let's have a look at how much I really spent while learning how to sing in "the old way" of weekly singing lessons with a local teacher, peppered with a few courses and books etc.

Over the span of around 8 years, I spent anywhere between $20 to $100 for a singing lesson, so we'll average out the cost to around $40 or so, as I didn't make a habit of spending huge sums on lessons - but I wasn't shy of springing for the best when they became available.

In hindsight, this was a ridiculous amount of money to spend on something that is ultimately a simple and natural act. and now that I'm quite an accomplished professional singer - I kindof do wonder what exactly I was paying for, when the true answer to great singing really is so simple.

What did $15k of singing lessons teach me, really?

Most of these singing lessons centred around the usual stuff, like support and breathing, resonance, hitting high notes and occasionally some troubleshooting with an actual song or two.

You know what though? I actually learned more in about two weeks with my final teacher than I did in almost a decade of singing lessons with almost as many teachers. You might be wondering exactly what juicy secrets I was taught that turned it all around, what magic form of compression, or cry, or edge that I was shown that allowed me to sing with the natural ease of a well trained Tenor even though I'm naturally quite a low baritone.

Let me tell you the exact secret that he taught me about singing that NO ONE else ever shared with me:

I sucked at the fundamentals.

No, really - I absolutely sucked at the basics.

I had built up an attitude that great singing was all about the advanced stuff - the glottal compression, the modes, the cry, the modification, the twang - when I was an absolute noob at the fundamentals like lip trills, managing airflow, shaping my vowels and balancing my registers.

It was a harsh reality and pretty steep learning curve going from the stock standard weekly singing lessons I was used to, to a singing teacher who would NOT let me sing vowel sounds at all. It was lip trills, N, NG, Hoots and onset - for two full weeks, and if I was serious about keeping him as my teacher, then I wasn't allowed to sing ANY songs until we met again two weeks later.

Initially, I was pretty angry at this arrangement, especially being told he "didn't want me back" until I could sing lip trills the way he wanted me to do them, and those silly N and NG sounds - how boring! I had been singing for nearly TEN YEARS at this point, surely he knew I was ready to know the real secrets to singing like how to sing with glottal compression, cry mode and modified vowels.

What did I have to lose though?

I was kindof at the point where if this final approach didn't work, I was going to give up my dreams of becoming a singer at all and just return to playing guitar in bands instead. So I gave it a go, a SERIOUS go. I spent hours practising lip trills to develop a connection between chest and head voice (even though I absolutely KNEW I could take chest voice higher than he wanted me to), I worked on placement with N and NG (even though I absolutely KNEW my tone was aleady pretty cool) and I worked on hoot sounds (which i hated - who wants to sing like an old classical lady?).

Want to know the darndest thing? I went back to my next lesson a few weeks later, he had me sing a few lines of a song and it was 100% the BEST singing I had ever done in my life - in fact, I had gained range, my tone really was better, and there was absolutely zero strain in my singing which was a HUGE part of what I had been struggling against for almost ten years previously.

What magic was this?

One of the first things he said to me when I returned to this second lesson was "Okay, NOW you're ready to learn how to sing".

The reality of spending over $15k on singing lessons prior to this life changing experience working solely on the fundamentals - is that I had built a total imbalance into my voice, a physical tilt towards weight, strain, tension and force. By returning to the  fundamentals, many of the issues I had been experiencing simply melted away, and I was now able to approach the more advanced techniques like forward placement and vowel modification with an open mind and a balanced voice - and by golly they really DID work like a charm.

You see, the secret to great singing isn't advanced techniques, or secrets that a guru can sell you, or special terms or Italian words - the true secret to singing is a rock solid foundation, a firm grasp on the fundamentals and developing balance in your vocal mechanism.

I really don't want you to waste ten years of your life, or $15,000 like I did learning how to sing. 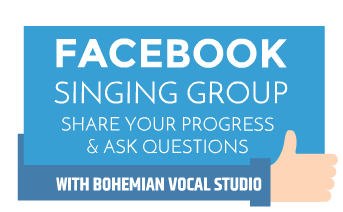 With 20 years experience learning how to sing and now a decade of coaching expertise under my belt, I've designed a fundamental approach to singing - the Foundation Vocal Approach; which is designed to reset the balance in your voice whether you're a total beginner singer, or whether you've been singing for 10 years with bad habits like I had been at that point.

With the Mixed Voice Singing Group (it's free to join!), personalised Skype Coaching and also the Foundation 101 & Growth 101 singing courses - I've started sharing this powerhouse approach to singing that is designed for singers like you and I that might not exactly be "naturals", or have tried everything else out there and nothing seems to work.

Don't give up hope - I know I almost did. If you're trying to learn how to sing better, and you're searching high and low for the true secret to great singing, the answer is in your foundation, and the solution to strain and tension is developing balance in each element of your voice.

Instead of telling you any further about how GREAT it is to sing with freedom, power and an incredible range, here's just a few quick examples of what I'm achieving now that I've set up my vocal foundation - just imagine what you will achieve when you finally master the fundamentals that have been holding you back!

Want to know whether you really have what it takes to become a great singer? My singing calculator is incredibly accurate at estimating your potential for improvement as a singer - whether you're a total beginner, a seasoned pro or even a voice coach yourself. This simple and quiz singing quiz will show you exactly where you need to invest your time and energy to improve your singing.