How To Start Singing Beginners Guide

Learning how to sing can be a daunting prospect when you’re not sure how to get started, but with this how to start singing beginners guide, you’ll have a rock solid foundation to build your range and develop your tone upon. Foundation in singing really is just like the foundation of a house, the concrete slab that your range (roof) and tone (walls) are built upon. Vocal foundation includes the important basics like breathing, placement, mix, vowel shaping, resonance blending and of course resonance and support.

The first step is to set up a strong posture so that you can breathe efficiently while creating a powerfully resonance sound. Singing itself is more a game of balance and air pressure than it is muscular strength or airflow. Many beginner singers make the mistake of pushing more air to achieve volume or power, when in fact good support in singing involves balancing your air flow and air pressure – a supported tone is skewed towards pressure, and an unsupported tone leans towards airflow instead.


Are you ready to start singing beginners? Let’s get started!

It might just been THE most boring topic in singing, but posture and breathing really are the linchpin of your voice, without proper posture and breath support, you’ll ultimately lack range, power and struggle to achieve a pleasant singing tone. A great posture in singing looks a little like this:

Keeping your posture as natural and relaxed as you can with this setup, you can now achieve engagement of the diaphragm by breathing low in a muscular fashion, similar to if you were to breathe low and sharp through a drinking straw, or take a deep breath before diving in the ocean. You should feel an outward feeling around your mid section and upper abs as the intercostals and lower back muscles work together to lower the diaphragm. By practicing this movement every time you sing, diaphragmatic breathing and healthy posture will become second nature, setting you up with a perpetually strong foundation when you start progressing as a singer and increasing your range.

As we discussed, singing isn’t a result of airflow, it’s actually a result of vibration caused by air PRESSURE. A great example of a resonant sound is a V, Z, N or NG – you’ll notice that these sounds are easy to sustain with a resonant buzz high in your head or behind your nose. Along with the buzz in the back, you’ll also notice a secondary sound that occurs at the lips which I often refer to as articulation. Understanding that these are two separate sounds is the key to being able to sing an effective lip trill exercise. The lip trill really is the most versatile and powerful singing exercise you could ever practice, and it can be used in many different ways to better your voice.

Singing with resonance is related to how to sing your vowel sounds, which we’ll talk about in a moment. Remember, singing is about resonance and pressure, not about forcing sound and air from your mouth. Retain your air while creating that resonant buzz and your voice will start growing and developing like crazy!

For many different accents, such as my own Australian accent, vowels are created by pronunciation at the front of the face or through the nose. In singing however, you actually shape each vowel sound using the back of the tongue while allowing resonant space in the pharynx appropriate to each vowel sound you sing and the range you are using. A simple illustration of this is if you alternate between an EE and an AH sound, you’ll notice that your tongue is ‘raised’ at the back for the EE sound, and lowered to a concave on the AH – like Feed and Far, or See and Car. Learning to shape each vowel sound truly is the most powerful key to building a consistent and powerful singing voice.

In a practical sense, “vowel” doesn’t really mean “vowel” in the same sense it does when you speak – “vowel” in singing really refers to efficient resonance while singing words. An example is that a raised tongue at the back and slightly narrowed vocal tract is the most efficient way to resonate on an EE sound, while a lowered tongue and relative wideness in the vocal tract allows efficient resonance for an AH sound – making the differentiation between sound and resonance was personally a huge key to developing my own vowel, vowels really were a game changer for my voice.

Here’s where things get a little interesting and tricky. Resonance space occurs when you raise the soft palate to allow access to the pharynx on your higher notes, while also blocking any airflow through the nose on each of your vowel sounds. Resonant space is actually easy to access when you sing, but our perception of where/how our voices resonate often makes for poor resonance as we ascend in range. A great way to access resonant space when you sing is to alternate between a closed and open vowel sound, for example OO to AH, or EE to AY while directing all of your resonance into the back of your head up above the soft palate. If you release your sound towards head voice through the middle of your voice you’ll notice that your tone actually stays ‘full’ and ‘rich’ even though you have the sensation of a fully released head voice – this is the key to extending your range and singing high chest voice notes. 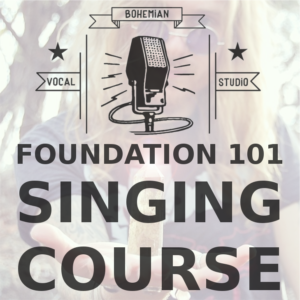 This open resonant space gives you access to the third “honorary” register, Mix, or middle voice. Mix voice occurs when you make a blend of both chest and head resonance, in essence creating a bridge between your two registers while allowing the rich depth of chest voice AND making use of the extensive range afforded by your head register. Resonant space is key to developing your mix, and mix is key to bridging chest and head while retaining the full sound of your low range as you ascend into the higher register.

Mix voice has a specific tonal quality that is immediately recognisable in professional singers who appear to have an endless chest voice that soars well past where your own vocal break lies – where they just keep singing higher and higher with a full ‘chesty’ mix. If you’re serious about becoming a great singer, it’s time to get serious about your mix…

Consonant sounds aren’t necessarily the source of your vocal onset – let me explain onsets first. A vocal onset is literally the onset of your resonance, the way that your voice starts when you sing. A balanced onset, the only truly healthy onset, occurs when you make a central balance between airflow and vocal fold closure, literally creating “instant” and strain-free resonance. Now, on either side of this balanced onset you have a breathy (aspirate) onset, where airflow occurs before you achieve closure, or a glottal attack (hard) onset where you achieve closure before you release any air – these two secondary onsets are potentially damaging and tiring to the voice, and often result in a pitchy intonation. Creating a balanced onset has personally been another important key in my own development as a singer.


Now, beyond onsets, we also have consonants, those tricky little buggers that often wreak havoc on even the best vocal technique. Remember how we discussed the “two forms of resonance” when you sing a V, Z or N sound? Bingo, this is articulation of your consonant sound. Rather than trying to force an onset through your consonant sound, the proper way to sing consonant sounds is actually to create a balanced onset while also creating a forward articulation of your consonant, just like the resonant V and Z, except you can also achieve this same separation and balance with your other consonant sounds like G, P, B, and D. I personally like to group my consonant sounds and those of my vocal students into similar types and form an individual approach to each type considering their/my voice type, accent, level of experience and any other glaring issues or vocal idiosyncrasies.

Every voice is different, and hence, the approach you use really needs to be designed for your unique voice and the goals that you put in place for your own progress as a singer. Remember, singing is a process of balance and coordination that takes time and practice, there really is not such thing as an ‘easy fix’ or a ‘one-size-fits-all’ approach that will cover every stepping stone you may need, or every obstacle you may face in your journey towards building your dreams. Let me know in the comments below what your vocal goals are and I’ll set you up with a plan to achieve them as efficiently as possible!

How to start singing today

I’ve already mentioned quite a few familiar sounds that you already know, like resonant V and Z sounds, vowel sounds like EE and AH and also lip trills. Using this How To Start Singing Beginners guide, you can actually start singing today and set good habits and healthy technique in motion before you take it to the next level with professional voice coaching. Remember, singing is a ultimately a process of balance rather than a feat of muscular strength, the world’s greatest singing starts like Michael Jackson and Chris Cornell weren’t “strong” singers, they were “balanced” singers – are you singing with balance and consistency?

A great place to start is the free foundations 101 singing course available here at Bohemian Vocal Studio which will show you how to set up a rock-solid foundation for your voice so that you can support a healthy tone and powerful range. When you’re ready to knock it up another notch with a professional voice coach, you’re welcome to book a Skype Lesson with me and we’ll start working towards extending your high range and developing balance, control and consistency in your voice every time you sing!

If you have any questions about how to start singing, feel free to leave any feedback or questions below!