5 Pieces of TERRIBLE Singing Advice I Was Given [Are You Doing These Too?] 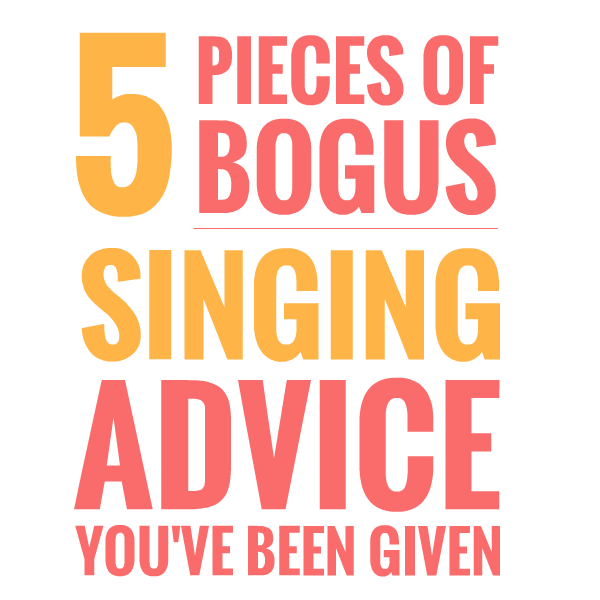 We're not all born as world class, naturally gifted singers. Some of us have to work for it, and work hard.

This was absolutely me.

It might not be a great business strategy to come right out of the gates saying "I'm not a gifted singer by nature", but I think it's important to understand the difference between someone who sounds great naturally, and someone who really knows what they're doing because they had to learn it the hard way.

And do you want to know WHY I had such a hard time learning how to sing?

Obviously, there's the "not gifted" part that we just spoke about - the formidable voice I have as a singer is hard won and hard fought.

But most of all, it's the terrible advice my first few singing teachers gave me.

Now, I'm not saying they were bad teachers or bad singers or anything like that - it's just that in over a decade of being a professional voice coach myself, I've discovered that context is far more important than scientific quotes from Wikipedia about laryngeal tilt and thyroid cartilage.

Let me share with you 5 absolutely abysmal pieces of advice I was given as a beginner singer - and you can tell me in the comments below; have you been following these same misdirections and misnomers?

One of the first teachers I went to was one of those "sing like you speak!" guys who in hindsight, just didn't get it. The very first thing he told me was something along the lines of:

Sure, you don't want to sing like an Owl, but raising the soft palate is actually KEY to developing powerful resonance, singing with intensity and increasing your range; the very essence of great rock singing if you ask me.

I think in context, he was probably trying to say that you don't have to sound like an Opera singer when you sing rock and pop. However, the key there is really varying levels and styles of delivery, placement and compression that separates the classical 'sound' from classical 'technique'.

For me personally, learning to create the right vowel overtone by raising the soft palate and altering the tract has been the true secret to increasing my range and improving my voice.

I have to say - This was probably the worst advice I was ever given.

Again, total crap. The idea that you 'smile' when you sing actually comes from "the internal smile" in classical singing technique - where you raise the soft palate (again, read above) with a non visible smile;

I see this all the time on YouTube videos - and you'll notice that when people do this they actually shout EVERYTHING that they sing, regardless of whether the song calls for it. That's because a wide smile at the mouth actually spreads the soft palate wide and tight, making it easier to push through the first break; but obliterating your third vowel overtone and 'splatting' your higher register. If you ever want the chance to sing high notes and sing without strain, then you need to flush this awful piece of advice immediately.

There's a difference between a wider vowel like AY being sung with a slightly more horizontal embouchure and actually widening into a smile when you sing - don't do it.

This one is also up there for some of the worst advice I've ever received - and sadly it seems to be a core piece of advice in many contemporary singing courses and methods out there. Phooey!

Being told over and over to "project more!" made me yell and shout louder and louder to push my voice further across the room, when in fact, projection is really more of a "floating note" concept where you sever the connection between muscularity at the vocal folds and your tone, in essence aiming to sing/place your voice away from the body rather than in your neck.

This one of itself isn't terrible advice, but it was framed in a bad way that set me back years of progress with yelling across a room trying to 'project' my sound.

If I can give you a better piece of advice, it's to focus on the sound returning to you from a far corner of the room - or "inhalare la voce" in a classical sense, meaning figuratively to "inhale your voice".

A good workflow for developing projection is to think like this: The voice starts in front of the face, enters through the vowel space of the mouth, then raises up into the pharynx as you lift the soft palate.

I don't know about you, or what you guys are eating, but I don't push, clench or strain when I *ahem* use the facilities.

I've heard this SO many times over the years in courses, from teachers and from Joe Schmoe commenting on Reddit or YouTube as though he's a seasoned pro, even though he's a 14 year old kid who has spent only 10 minutes skimming through his older brother's copy of some singing course.

A tight solar plexus results in radiating tension throughout the body, period.

Support isn't a muscular push, it's a balancing act of pressure and airflow - the latter really being the important thing here.

Adding pressure by clenching like you're constipated isn't adding compression, it's adding tension and pressure. Limiting the amount, but maintaining a steady flow of, consistent airflow is the key to great compression and strong support - not pushing, clenching or going HUH! HUH! HUH! for five minutes before you sing.

The key to effective support is really to think 'laterally' as though your air and diaphragm work side to side form the ribs out rather than up and down from the belly to the mouth.

Limited but consistent airflow is the key, not holding it in.

I love Johnny Cash, don't get me wrong. But as a guy with a lower voice, this one was a massive blow to the confidence to begin with, and absolute B.S. as the salt in the wound.

Classical vocal fach types are based around tonal quality and your physical ability to portray a character on stage, not "how high you can sing". I just can't repeat this enough.

If we're talking pure range, then my natural C2 makes me a Bass Baritone. But if we're talking build, the fact I'm just shy of 6" and built quite slight means I don't fit any villain parts portayed by a big, towering and possibly overweight bass singer - so I'm likely a Verdi Baritone - aka, a small guy with a big voice.

You can see that these voice types just aren't designed to help you sing Rock music, so why is everyone using them as an excuse for poor technique?

The only reason you can't sing an A4.... or a C5.... or even an E5... is because you're doing it wrong and trying to yell it in chest voice rather than bridging a full connection between your registers and nailing the right register overtone within your vowel modification; not because you're a baritone.

This one also set me back YEARS as a singer as I stopped focusing on my goals of extending my range and finding my upper register and just went back to bellowing D4's as my highest note like they were going out of fashion.

Voice type doesn't limit your potential range, unless you're aiming for a very traditional role within an Opera where you build/type/size/tone meet a specific character within the piece.

The upside to this, is that I can now do a pretty gnarly Johnny Cash impersonation AND I'm able to sing the highest Soundgarden songs with ease. Limited baritone range my ass!

If you're horrified that you've been trying to implement one, two or even ALL of the terrible pieces of advice that I too was given many years ago - it's okay, all is not lost.

Let me set you straight by telling you the number one most important thing you will EVER learn as a singer:

There are FOUR separate register overtones for each vowel you sing.

Basically, each register of the voice comes with an altered tonal character for each vowel that you sing, and this is ultimately the essence and intention of Vowel Modification.

Now, we're talking resonant overtone here, not "speech pronunciation", so if you're having trouble accessing your higher overtones, you NEED to check out this video:

Having BIG DREAMS as a singer means you need a BIG VOICE to match - watch the video above to learn how you're going to build a big voice too!